Pat Smith posted this week about blurs and action lines.  He makes a lot of good points.  Mainly that they're often redundant, and economy is paramount in animation.  In general, I agree with him -especially regarding the use in his work.

It got me wondering, when are they necessary?

We're working on a project now in which they're part of the graphic language -they don't add anything to the action, but help to form a visual style.  There, they're necessary.

Sometime the animation needs them to make it work.  Below is an example from "Hockey Monkey", the only good film we've ever produced: 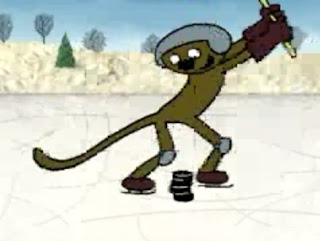 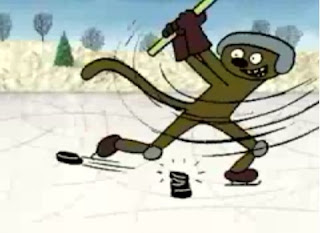 This was animated by Tissa David (after designs by James Kochalka).  When we started this, she and I talked about "The Great Frost" the segment from Simple Gifts which she animated (based on a section from Virginia Woolf's Orlando and designs by Seymour Chwast).  "The Great Frost" also happened on ice.  Nearly twenty years later she was still bothered by it.  "Ice has to be on ones," she said.

Add to that the powerful action of the slap shot, and you need to fill in blanks with smears and speed lines.  Otherwise, there's no connection between the two drawing and the animation loses it sense.

The kids were designed by Maciek Albrecht (who's also a teacher) and animated by Alex Reshanov.  The monkey was animated by Tissa David.  Live action shot and directed by Jesse Gordon.

There's a lot to say about this piece.  For years afterward I met people from Nickelodeon who claimed to have "produced" this.  I guess if "producing" means sitting in an office and having absolutely nothing to do with creative, technical, or financial aspect of a production, then -yeah - a lot of producers.  We sure could've used their help schlepping in the snow.

But that's what good work does. "Success has many fathers".

We shot this 16mm.  That's why is all Benny Hill.  We undercranked to spend less on film and lab.  If you shoot half the film (by running it at 12 fps instead of 24) it costs half as much.

And we couldn't afford to cast, so we dressed up the band and all the guys on the shoot.  There was a discussion about the "bad drag" of the mothers and teachers.  This was one fight I wasn't going to lose.  I don't remember who was against the idea, but we were going the full Monty Python on this.

I'm Mother #1.  James Kochalka is Mother #2.  It was really, really cold.  You can't see because of the black and white but it was snowing for most of this shoot.  We would huddle in the outer house (now R. O. Blechman's full time studio) between takes shiverring and jockeying in front of the fire.

It ran on Ka-Blam!  Bob Mittenthal, Mike Rubiner, Chris Viscardi, Will McRobb were the delightful creatives who gave us the assignment.  Irene Sherman was the producer for Nickelodeon.

One last tidbit.  Some of the lawyers at Viacom were worried about showing Kochalka's likeness on TV, fearing some kid would see his face go to their local Sam Goody to purchase one of his CDs only to bring it home and be forever scarred by the filthy, filthy lyrics.  This disregarded the fact that you couldn't even find his CDs in New York and his name was nowhere in the credits.  So we fought to keep him in, until finally reaching on the idea of wearing the mask.  Problem solved.

So we deliver the DigiBeta master, and a few days later I get call from Nickelodeon -"It's great, we love it!  It's just too bad you can't see James' face behind that mask."

Lovely clip, Richard.
And, I'm with you- that action lines might be used as part of specific style.

Although I'm all for Pat Smith deciding that he doesn't want to use them.

So many factors go in to animated movement. I want to quote Bob Seger again,... "what to leave in, what to leave out."

As you know, I animated most of my stuff in After Effects these days (convenience more than anything).

I use the motion blur (the digital version of speed lines) in that because it really does make it easier on the eye.

It also lets me cheat a lot...

My first words from John Hubley when I started working for him was that I should remove all speed lines the animator had drawn. He didn't want them, and he was right. They're not really necessary. They just fill in the overlap space to allow that old animation rule to work. (All moving objects should overlap - however slight. I probably have to demonstrate more properly, since I haven't articulated it well this morning.)
Tissa's animation works nicely on ones, especially the first scene and the glide of the second.